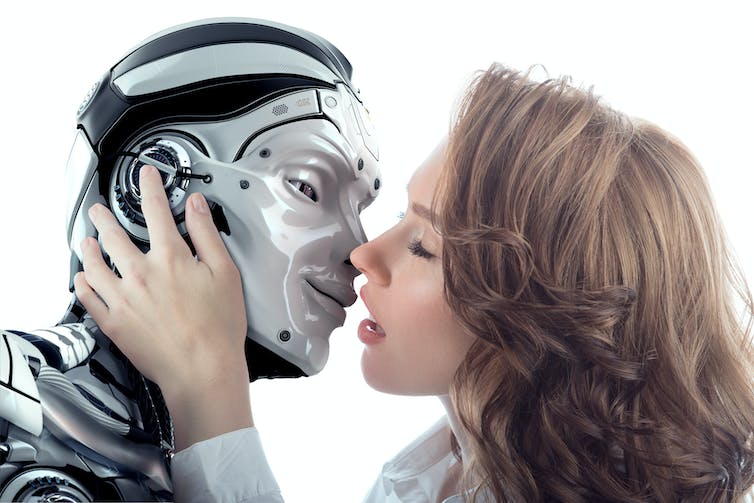 Sex as we know it is about to change.

We are already living through a new sexual revolution, thanks to technologies that have transformed the way we relate to each other in our intimate relationships. But we believe that a second wave of sexual technologies is now starting to appear, and that these are transforming how some people view their very sexual identity.

People we refer to as “digisexuals” are turning to advanced technologies, such as robots, virtual reality (VR) environments and feedback devices known as teledildonics, to take the place of human partners.

In our research, we use the term digisexuality in two senses. The first, broader sense is to describe the use of advanced technologies in sex and relationships. People are already familiar with what we call first-wave sexual technologies, which are the many things that we use to connect us with our current or prospective partners. We text each other, we use Snapchat and Skype, and we go on social apps like Tinder and Bumble to meet new people.

These technologies have been adopted so widely, so quickly, that it is easy to miss what a profound effect they have had on our intimate lives.

It is fascinating to study how people use technology in their relationships. Not surprisingly, in our research we can already see people displaying different attachment styles in their use of technology. As with their human relationships, people relate to their technology in ways that may be secure, anxious, avoidant or some (often disorganized) combination of the three.

There is a second, narrower sense, in which we use the term digisexuals for people whose sexual identity is shaped by what we call second-wave sexual technologies.

These technologies are defined by their ability to offer sexual experiences that are intense, immersive and do not depend on a human partner. Sex robots are the second-wave technology people are most familiar with. They don’t exist yet, not really, but they have been widely discussed in the media and often appear in movies and on television. Some companies have previewed sex robot prototypes, but these are nothing close to what most people would consider a proper sexbot. They are also incredibly creepy.

There are several companies, such as the Real Doll company, working on developing realistic sexbots. But there are a few technical hurdles they have yet to overcome. Truly interactive artificial intelligence is developing slowly, for instance, and it is proving difficult to teach a robot to walk. More interestingly, some inventors have begun experimenting with innovative, non-anthropomorphic designs for sexbots.

Meanwhile, VR is progressing rapidly. And in the sex industry, VR is already being used in ways that go beyond the passive viewing of pornography. Immersive virtual worlds and multi-player environments, often coupled with haptic feedback devices, are already being created that offer people intense sexual experiences that the real world possibly never could.

Investigative journalist Emily Witt has written about her experience with some of these technologies in her 2016 book, Future Sex: A New Kind of Free Love.

There is compelling evidence that second-wave technologies have an effect on our brains that is qualitatively different from what came before.

MIT professor Sherry Turkle and others have done studies on the intensity of the bond people tend to form with what she calls “relational artifacts” such as robots. Turkle defines relational artifacts as “non-living objects that are, or at least appear to be, sufficiently responsive that people naturally conceive themselves to be in a mutual relationship with them.” Immersive VR experiences also offer a level of intensity that is qualitatively different from other sorts of media.

In a lecture at the Virtual Futures Forum in 2016, VR researcher Sylvia Xueni Pan explained the immersive nature of VR technology. It creates what she describes as a placement and plausibility illusion within the human brain.

As a result of its real-time positioning, 3D stereo display and its total field of view, the user’s brain comes to believe that the user is really present. As she says: “If situations and events that happen in VR actually correlates to your actions and relates personally to you, then you react towards these events as if they were real.”

As these technologies develop, they will enable sexual experiences that many people will find just as satisfying as those with human partners, or in some cases more so.

We believe that in the coming decades, as these technologies become more sophisticated and more widespread, there will be an increasing number of people who will choose to find sex and partnership entirely from artificial agents or in virtual environments. < the emergence of this new sexual identity we call digisexuality.

A digisexual is someone who sees immersive technologies such as sex robots and virtual reality pornography as integral to their sexual experience, and who feels no need to search for physical intimacy with human partners.

Marginal sexual identities almost invariably face stigma, and it is already apparent that digisexuals will be no exception. The idea of digisexuality as an identity has already received strong negative reactions from many commentators in the media and online.

Then, as time goes on, we have gradually learned to be more accepting of all these diverse sexual identities. We should bring that same openness to digisexuals. As immersive sexual technologies become more widespread, we should approach them, and their users, with an open mind.

We don’t know where technology is going, and there are definitely concerns that need to be discussed — such as the ways in which our interactions with technology could shape our attitudes towards consent with our human partners.

Our research addresses one specific piece of the puzzle: the question of how technology impacts sexual-identity formation, and how people with technologically based sexual identities may face stigma and prejudice. Yes, there are dangers. But whips and paddles can hurt too.

This article is republished from The Conversation under a Creative Commons license. Read the original article.

How To Save Big With a VPN When Shopping Online during Christmas?

How can we make sure that algorithms are fair?

What is the industrial revolution 4.0

The price of era in teaching younger children

To stop a tech apocalypse we need ethics and the arts

[…] There are still some areas that don’t have internet connection, even in the United States. In addition, an internet connection means the emergence of new security holes. A rival company is definitely trying to snoop on the performance and design of production through the computer security of production controls that can now be accessed from the internet. See also : Love with Robots […]

I personally appreciate this article for the well-researched material as well as awesome wording. I got so much attracted to this particular content that I couldn’t quit going through. I am impressed with your job and proficiency. Thanks so much.